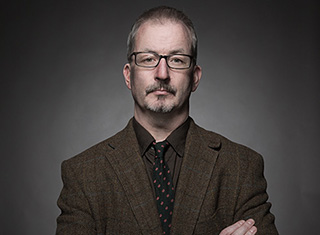 Graduated in 1991 from Newcastle Polytechnic with a BA (Hons) in Fine Art.

Lived and worked in Japan and Canada from 1997-2003 holding various teaching posts and regularly exhibited. Returned to the UK (Newcastle) to complete a Masters Degree in Fine Art Practices in 2003-2004.

In 2005 awarded doctoral funding by the Arts and Humanities Research Council.
Doctorate completed in 2010.

From 2008-2012 held a variety of teaching posts and roles at Northumbria University and Tyne College.

In 2012 relocated as Senior Fine Art Lecturer to The British Higher School (Moscow).

Artist and practice-led researcher whose earlier studio practice centred on general ideas and notions of classification and resulting taxonomies.

Studio Practice was developed on an MA Practice programme through an engagement with criminal forensics procedures, methods and approaches.

MA Activity lead to a Doctoral thesis entitled ‘The Power of Naming’; Co-option in Fine Art Practice a practice-led research project and investigatory journey exploring ‘terrains of interest’ that have opened up, stimulated, and informed, studio and exhibition practices. Plotting a shift from the illustrative via natural history classification systems, the co-option of a forensic glossary to the poetics of creative practice.